The purpose of this article is to present our current knowledge and progress of the implementation of native controls in the native Mac OS X version of OpenOffice.org. Our goal by implementing native controls is to remove the win32 look as much as possible and replace it by the Aqua look and feel using the Carbon API.

The Appearance Manager and HITheme

Apple provides an easy way to change a custom user interface to an aqua interface by using the Appearance Manager(AM). This API was first developed for Mac OS 8 and is centered around QuickDraw. The AM is less and less supported by Apple since 10.2 and any implementation needs to be replaced with the HIToolbox version: HITheme. The problem with HITheme is that its implementation started on Mac OS X 10.2 (Jaguar) and has since gone under many revisions and new functions have been progressively added with each new version of OS X. Therefore some functions in the 10.4 version might not be in 10.3 or 10.2. This is one of the reason why the native version of OpenOffice.org will run on Mac OS X 10.4 and higher only.

Unfortunately there is not much documentation provided by Apple about HITheme. Thus we have to look at the HITheme.h header file directly and read the extensive comments to understand how to use this API. All the constants used to describe the type of controls that we want to implement is still the same as in the AM. This is the reason why the AM reference document is still useful and should always be opened when implementing native controls. The AM and HITheme are very similar in the way they approach the implementation of native controls, most of the time the functions have similar names and the arguments different types so you can always use the AM reference to give you an idea about the procedure to follow.

This file was copied directly from the Windows implementation of native controls. All the useless functions were removed and we are left with 6 functions:

Most of the stuff used in salnativewidgets.hxx are from HITheme.h (or Appearance.h for previous test)

The native controls and the implementation

Here is a list of all the controls that need to be native. Since some of them do not have the same name in VCL and Carbon, they are listed in this format: <VCL name> - <Carbon name> when they are different.

This is the regular OK, Cancel buttons.

[FIXME] width is still not correct (work in progress)

[FIXME] How implement Heart Beat effect ? ( should be something default)

This is the regular radio button.

This is the regular check box.

Remaining issues : the checkmark is ok, but is only refreshed when the mouse goes out of the control area.

[UPDATE] : with correct refresh, the checkmarks disappears as expected

Sébastien and me finally found a way to use HIView and draw comboboxes. Please have a look at Mac_OS_X_Implementing_HIView for the documentation and the work in progress

As you can see, the final control is greyed. [FIXME] : change for status active when not clicked

Our previous try was plain wrong, because we where confused with listboxes.

As you can see, we are in facvt using lisboxes (no data entry possible ) :

Mechanism seems similar to other controls : in vcl/source/control/combobox.cxx, GetNativeControlRegion is used, so we'll proceed like for scrollbar.

This is the regular scrollbar.

[WORK IN PROGRESS] Aqua scrollbar works now as expected (see vcl/aqua/source/gdi/salnatigewidgets.cxx in aquavcl01 cws ), but some issues are remaining:

Translation of the Control Area

Everything seems to work excepted the button control area, because left/top control button is not located the same way for vcl and for aqua control : same behaviour, but different places.

-> our problem is simple : translate the coordinates of the control area of left/top button under aqua control, else, clicking on the left of the scrollbar ... the button on right is active :-)

"...The actual hit testing is done in the overloaded SalGraphics::hitTestNativeControl method, so you can implement your own sensitive areas there. The getNativeControlRegion is used for drawing purposes (so the buttons are drawn at the positions you tell there)..."

How a ScrollBar is drawn

After printing out the part numbers passed to draw a ScrollBar, I found out how it is actually drawn out:

The first two parts are self-explanatory. The last 3 are a little more confusing at first especially since some heights and widths can be negative. But here is what they are.

This part is the slider. As described by its value, it is vertical. The horizontal equivalent is part 210 - PART_THUMB_HORZ. 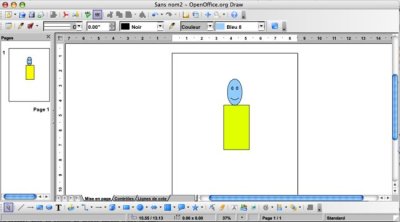 Pierre fixed an important bug, and we now have vertical scrollbar working fine (last remaining problem is top arrow), but horizontal is still having problems. 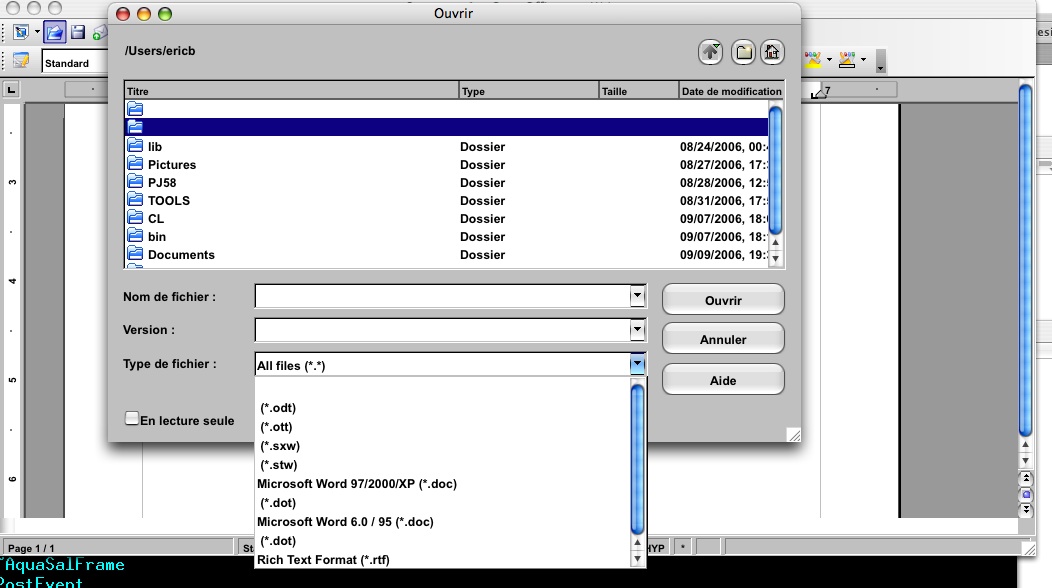 (03rd September) Does not work as expected, work in progress to fix arrows issue, and obtain correct redrawing (arrows are correctly drawn, but not at good place). See screenshot:

Todo : implement hitTestNativeControl, to draw up and down parts.

CTRL_TAB_BODY : background of a Tab Pane

The scrollbar is drawn separately.

For the version element of the HIThemeTabPaneDrawInfo structure, see tabs as the values are the same.

CTRL_INTROPROGRESS: Progress bar of the splash screen. Its implementation is in the desktop module

Preliminary : in AquaSalGraphics::IsNativeControlSupported(), tabs are present :

Controls not yet implemented

BOOL AquaSalGraphics::IsNativeControlSupported() returns true when control is one of the listed controls :

This work is part of http://wiki.services.openoffice.org/wiki/Mac_OS_X_Porting_-_Work_Areas/Todo%27s